LITELOK Moto 108, the lightest motorbike lock on the block. 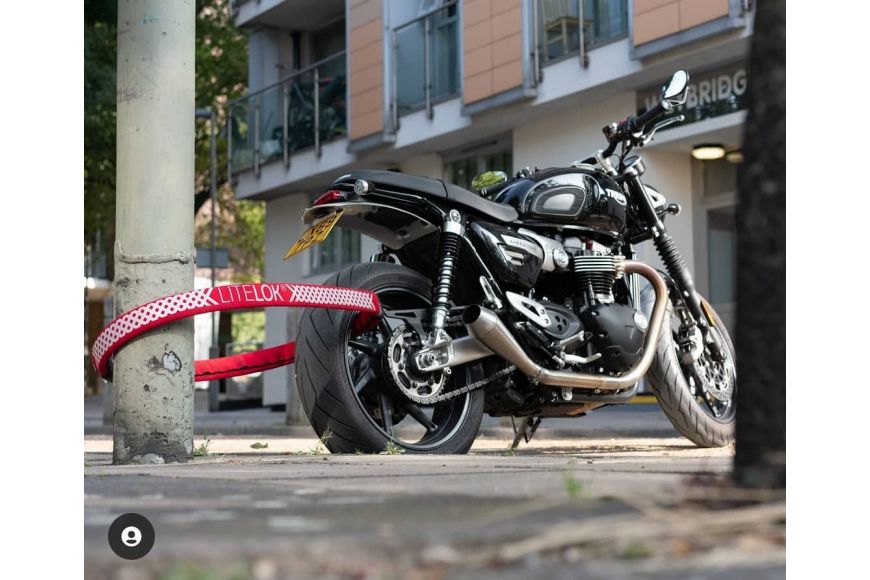 With due pride we present a new and super lightweight lock: The LITELOK Moto 108

With a weight of just 1,46kg this British Scale-up succeeded in enginering the lightest motorcycle lock which has a Gold Standard and ART certificate. The LITELOK Moto 108 is flexible and easy to use so locking your bike to the surroundings is a breeze. Without the drawbacks that come with a heavy chain. The lock can be curled up so it's easy to pack in your tankbag or panniers. Because of the low weight and the neoprene sleeve it won't damage your bike, nor the rest of your luggage. The sleeve will also keep your lock in pristine condition.

The locks' housing is made of a hardened steel alloy. The flexible belt is constructed of the patented "Boaflexicore", a newly designed composit that's light, flexible and strong. Instead of using old-fashioned, strong but heavy steel, quite a bit of research was done into the specific forces which a lock has to withstand.

To keep the cutting load up to par without adding mass and weight, a polymer was developped which doesn't develop cracks which can grow larger and eventuallly break like with steel. Instead the molecules shift under pressure which results in more material 'flowing' to the point at which the force is exerted. It operates in the same fashion bulletproof body armour does.

This composit consisting of a steel alloy and a polymer are interweaved in a matrix structure which is patented under the name "BoaFlexicore". It is developed by the founder of LITELOK, professor Neil Barron. He has a background in the Aerospace Industrie and he captured the strentgh of BoaFlexicore beautifully in the following image:

The technical explanation is: This fighter, a FA-18 E/F Super Hornet has a mass of 14.552 kg and for the fast calculators among us that equals 142,75 kN. The maximal point-concentrated load of BoaFlexicore is 148 kN and the maximum tensile strenth is 177 kN. This means this fighter jet's weight is fully supported by a BoaFlexicore belt and it can withstand the pressure load aswell.

Fun fact by the way is that LITELOK had to develop new cutting machinery because their machines kept getting dull whilst cutting the belts to size.

We are really stoked about this product because it's not just another product, but it really is an innovative and progressive lock. It offers the safety of a chain without damaging your panniers, tank or luggage while driving. Also the chance of scratching the paint on the rims or the frame is minimized when you quickly want to lock the bike on your desination.

At the moment the LITELOK Moto 108 locks are available in balck or red and as a single or a twin pack. The Twin pack contains two locks which are operated by the same key. These can be used independantly to lock the bike in two places or used together which makes to lock two times larger.